BVSC + Meet Our Team
Surrounding our patients is what we do so you know your pet is in good hands. Meet our wonderful team! 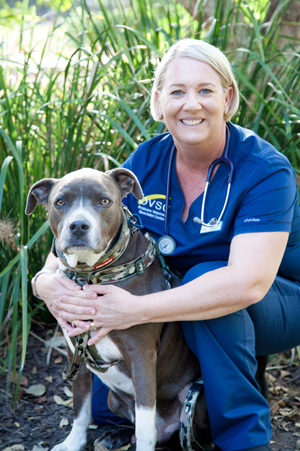 Growing up, Tamara was surrounded by many varying animals and could easily be be found in the paddock working with her horse and her border collie right by her side. Animals have always been her passion, however at the end of high school, she was guided into another industry that steered her away from the veterinary industry.

After 20 years of a successful career, her professional fulfilment wasn’t met so she decided to follow her dream. She volunteered to work on weekends at her local vet (Warner Vets) and at the same time studied for her Cert IV in Veterinary Nursing. She was then offered a full time position with the practice completing her studies in two years. After becoming qualified, she then continued to study, attending Nursing conferences and her knowledge not only grew, as did her role, when she became Nurse Manager, a role she really enjoyed. Her eagerness to learn and be all that she could be, led her to a new role as a rotating nurse at BVSC and then to on to becoming an Ophthalmology Nurse. Tamara has now joined the admin team and brought all her valuable experience and skills to the new role.

Tamara’s passion is to help animals, not only wanting to help them medically but also making sure their visit while in hospital is a happy one. She treats her patients as her own which means giving them many cuddles and lots of support whilst they are without their families during treatment.

Tamara’s home is shared with her husband, two sons, along with her three dogs, Mishka, Mack and Mildred as well as her cats, Schmidt and Poppy.

+ Nurse Tamara with one of her fur babies, Mack